Nahom Berhane: The legacy of a passionate community leader 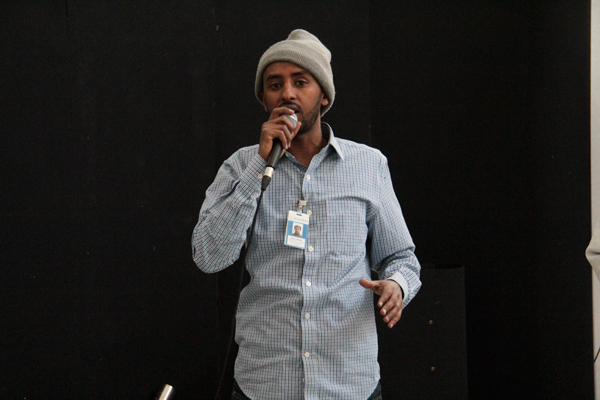 Can you imagine what the first black mayor of Toronto might have looked like? A passionate leader with genuine commitment to fairness, equity, and community empowerment. This combined with irresistible charisma and optimism that brings people from all walks of life together and inspires them to become agents of positive change, while at the same time infusing music, art and laughs in the process to make social justice work the most fun thing to do. This is Nahom Berhane, a well-respected and much loved young community leader, who was also a health promoter, musician, entrepreneur, and mentor for many youths. This is Nahom Berhane, who came to Canada when he was ten years old and who dreamt of running for city office one day.

This is Nahom Berhane, who when asked what superpower he would like to have, said “the wind” so he could be everywhere and touch the lives of many. Growing up in the O’Connor Community – a low income neighborhood in Toronto – Nahom rose above everyday hardships to pursue his passions for justice, politics and art. Sadly, he was stabbed to death on September 27, 2014. He died on the street where he served. This, however, is not the story of Nahom’s death but celebration of his extraordinary life and of his legacy that lives on.

The Making of a Community Leader: Nahom in Action

Nahom Berhane was born on March 15 1980 in Eritrea. He came to Canada with his family in 1990. They decided to settle in the east end of Toronto, in the O’Connor community, where many other Eritrean immigrant families lived. Growing up in a low income neighborhood in Toronto, Nahom became acutely aware, from a young age, about the deep poverty and inequities in Toronto and their damaging social impacts, particularly on immigrant and racialized families. At the same time, he saw the tremendous value that a strong sense of community plays and so developed his passion for community development work early on.

In 2005 Nahom graduated from University of Windsor with a double major in Communications and Sociology. While in university Nahom became the president of the Eritrean Student Association. In this role he brought the Eritrean student community together and created, for the first time, a social support network which helped newcomer students both in their settlement and in their academic work. His passion for community work flourished further from then on. He returned to Toronto and continued to study and work in the community development field. Quickly he became very active in various community agencies and grassroots coalitions in the GTA focused on equity and social justice work: he worked as a community development and outreach worker for the North York Community House; he became an active member of the York Youth Coalition, and a member of the West Coalition on Housing and Homelessness. Through these activities, Nahom honed his skills in community development. In 2010, Nahom graduated from the United Way Toronto’s CITY Leaders Program. He also recently completed a certificate in Project Management from the University of Toronto and was preparing to apply for his Project Management Professional (PMP) designation.

Though he loved the diversity of Toronto, he was very concerned by the high levels of unemployment/underemployment, poverty, discrimination, and social exclusion faced by immigrant families, particularly those from racialized backgrounds in Toronto. The fact that Black communities in Canada faced the worst levels of unemployment and poverty was of big concern for Nahom. He saw first-hand the damaging social and health impacts that these structural inequities were having on many Eritrean-Canadians, and other newcomer groups and youth around him. But Nahom was not the kind to passively accept this problematic status quo in Canada. He decided to dedicate his professional life to making Canada a more equitable and fair nation. His unique approach was that he wanted to build community and social inclusion through the process.

Nahom spent the last five years of his professional life at Access Alliance Multicultural Health and Community Services as a health promoter. He embodied and practiced the role of ‘health promoter’ to its fullest capacity. For Nahom, reducing poverty and inequities and promoting community health were intimately connected co-determinants. He was instrumental in organizing dozens of community and health promotion events every year, from the Access Alliance Health Expo to curating Couchiching Institute on Public Affairs’ discussions. Nahom took proactive steps to make sure that stakeholders from all walks of life attended these events, from local government officials to marginalized families. And he made sure everyone felt included and had fun. At these events, Nahom was often seen with a megaphone trying to bring people together, making people laugh while raising awareness about valuable health/community resources. And he would do anything that was needed – from discussing important community issues with the local councillor or doing a quick run to the grocery store to purchase more halal hotdogs if we ran out!. A lot of his work focused on providing resources and opportunities to empower newcomer families. For example, he introduced a focus on financial literacy at Access Alliance which started with running annual tax clinics at the centre to help low-income families learn about and benefit from tax rebates and income supplements. This ultimately led to his working with the Community Based Research team at Access Alliance to conduct research about financial literacy among newcomers with the goals of creating tools to promote financial empowerment. His most recent accomplishment was piloting the ‘introduction to camping’ program in the summer of 2014, where he took newcomer families camping to the Georgian Bay Islands National Park. He was always out in the community, in the streets, and rarely at his office desk.

He was a community builder, a city builder, a nation builder. And he did it in an activist way that touched and inspired the people he connected with. “He was a guy who saw everybody’s potential and helped them reach it,” Access Alliance executive director Axelle Janczur shared. “I was able to see Nahom’s true passion about how he wanted to enlighten the community on the benefits of health awareness,” wrote Michael Kelly, a personal trainer and childhood friend of Nahom. Hibaq Gelle, a social media and community manager at Cultural Integration Policy, said, as she explained that Nahom devoted his life to helping youth in poverty and newcomers to the country: “He worked tirelessly to make this city better.”

Nahom Berhane was also a musician, a DJ, a musical entrepreneur and a music teacher. His sister Arsema shared that Nahom was truly alive when connecting his passion for life, music and community service. His musical career started with an appointment as a radio producer for CHUM FM. Later on Nahom became a music production program instructor at the Harbourfront Community Centre and the founder and CEO of I.N.C. Entertainment. His mentoring time was spent 1:1 with youngsters. He taught youths how to produce music, make beats, produce music or how to start an entertainment business. He found authenticity and happiness in small moments or accomplishments – such as a youth’s progress with a musical instrument, or children’s pure joy during their first wondrous encounters with music, or at spontaneous DJ happenings. For Nahom, music and art was about empowerment. Nahom made sure there was good music in every community event he organized.

Nahom is survived by two teenage daughters whom he raised with care and dedication. His endless search for a better and more beautiful world will live through them. But his true legacy is rooted in the community. On the day of his funeral thousands of mourners crowded the church and the streets surrounding it to pay a tribute to Nahom’s life. “Everybody’s here because he’s touched every single life — stranger or family or friend — it doesn’t even matter … newcomers,” Nahom’s sister Arsema Berhane said. “He died on the street where he served … He died on the street where he served.”

The Guest Editor for this post is Dilyana Mincheva, PhD